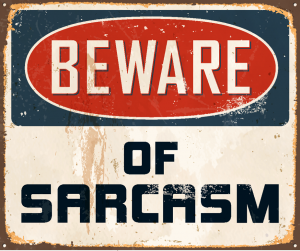 Sarcasm is often justified by saying, “I was only joking or teasing.” However, the intent does not matter.  The outcome is what matters.  Sarcasm is hurtful to the person receiving as well as the one delivering the message.  Sarcasm is the use of words or remarks in an ironic manner. Sarcasm has often become a negative habit and a way to not deal with items directly.  Sarcasm can also be a way to refuse to find ways to be lighthearted and humorous in an appropriate way. When sarcasm is practiced in an organization, sarcasm supports socially unjust acts which mar relationships and can result in discrimination toward a person or group. Remember sarcasm is defined as “cutting the flesh” or “tearing the flesh”.  Sarcasm is “the use of bitter or wounding remarks.”  This tears away trust and destroys communication, relationships and teams.

Teasing is attempting to make fun of another person in a “playful” manner; however, teasing ends up being unkind or annoying to the person receiving the comment. Joking can also create difficulties.  Joking is defined as “a statement said or done to excite laughter; a witticism or jest; a ridiculous statement, person, or circumstance or poke fun at.”  Joking also can be hurtful and harmful to another.

Possible Reasons for People to Participate in Sarcasm

What are Ways To Communicate Effectively, Process my Feelings and even Find Ways to be Humorous and Light-hearted

Consider the following statements, as well as ways to turn around the statements in the previous list. These are suggestions meant to stimulate your thoughts about other ways to express humor.

Communicate and Communication—“to make known; put into words; give expression to, as by gestures, facial aspects, or bodily posture; to interact with another or others in a meaningful fashion.”

Emotions and Emotional—“a strong subjective response” such as love, sadness, etc.  “Stirred by emotions; relating to, arising from, or appealing to the emotions.”

Feelings—“intuitive cognition; (similar definitions to emotions); an act of touching; a particular sensation conveyed by words; a general impression produced by a predominant quality or characteristic; stirred by emotions.”  “Emotions are expressed in feeling words such as mad, glad, sad, happy, etc.”