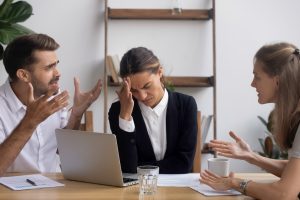 At one time or another in our lives, we are likely to be involved in some kind of conflict with another person. How we handle that conflict, how we respond to it, can make all the difference in terms of whether the conflict is resolved or remains a divisive issue.

The following options are a useful way to approach conflict with others to help resolve conflict situations.

When the conflict involves you:

When the conflict does not involve you (or when you are peripheral to it):